It was a day at the races for the Qatari’s, which since we are talking about a race in the middle of the Desert, involved camels. Yes ladies and gentlemen I went to a camel race and lived to tell about it

The experience itself was so quintessentially Qatari – it is ironic really. First take everything you know about horse racing and throw it out the window; in the world of Middle Eastern camel racing there is no gambling, actual jockeys, booze (of course), mass crowds with fancy hats or really very many spectators. The races last for about 15 minutes and get this – you race next to the camels in a 4×4 truck.

This is probably the coolest difference between horse racing and camel racing – actually racing next to the action. While we were spectators, the locals ride next to ‘their’ camel. Every camel in the race is owned by a Qatari. Rather than having a jockey that ensures the camel knows where they are going, they have a ‘monkey’ aka an electronic whip that the owner controls. As the race nears to the end, the owners try their best to get their unmanned beast to be the first to finish. While there are no cash prizes for any of the race wins, the larger races do a have a ‘consolation’ prize of a Lamborghini for first place and a Mercedes for 2nd and 3rd. Not bad for a race that doesn’t accept betting. 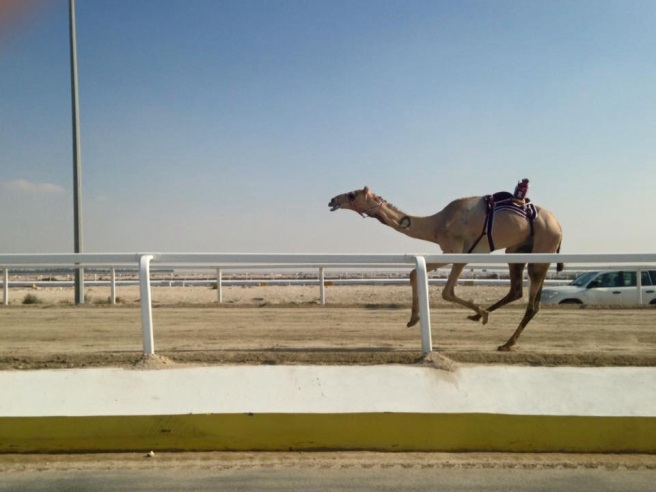 A camel itself costs upwards of $1M riyal or about $350K and is in its best racing age at 5. Previous to mechanical technology, a 5 year old child used to be the lucky individual atop of the camel. The practice has since been banned as inhumane (surprisingly).

Having gone to the Grand National, as well as my fair share of small town races, I have to say camel racing pales in comparison. I am sure it is fun for the few rich individuals that can afford to race their $350K camels for a Lamborghini, but for the rest of us commoners, it is downright boring. How do you have a race that you can’t drink or bet on? It is definitely not American and would have zero chance in England.

In so many ways this is what I have discovered about the Qatari culture. They have similar attempts at typically western events, but nearly all of them leave you feeling like it is a cheap (but more expensive) imitation of the real thing.

Drinking in general is a good example of this. There are places to drink, but it is only allowed in hotels. Who finds the hippest places in hotels? Drinks are overpriced, music is imported and the atmosphere is that of an expensive hotel trying to be cool. They aren’t bad, but nowhere close to the nightlife scene you would expect in a capital city.

With the ever expanding would of newly oil-rich nations, who knows what is next for camel racing. But I can tell you – the only race I will be watching in the future will be one where I can watch ‘my horse’ race to the top.