Many I have encountered love the country of Macedonia (FYROM). While small, it is inexpensive, yet not as poverty stricken as its neighbouring countries and full of beautiful scenery. My sister spent a month traveling the entire country and especially raved about the cities of Ohrid and Skopje. So, naturally, these were our 2 stop-off points on our 3 day/4 night trip to the country.

Starting off in Ohrid, we stayed in a stunning apartment I would highly recommend (http://vilamalsvetikliment.com). With views overlooking the frozen lake, we were greeted with a kraft of homemade wine upon arrival and woke with breakfast in bed every morning. 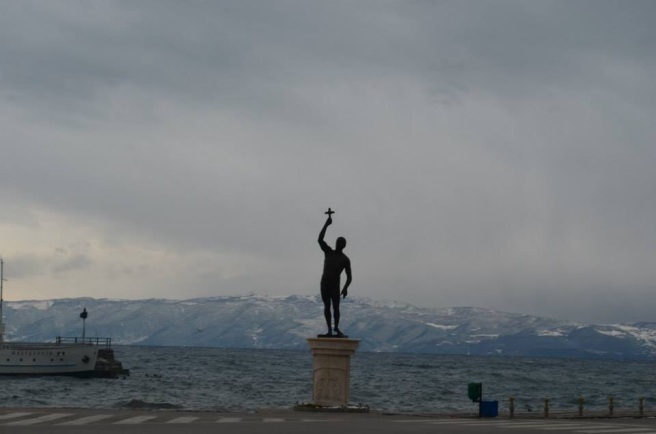 The town of Ohrid itself was quiet as it was off-season (this is a lake resort town), so our day trip/2 night stay was plenty of time to hike around the fortress, old roman ruins and famous 11th century church, St. Sofia. In the summer, the lake offers boat trips and other water activities, but I would say a weekend exertion is enough to take in the lake town and see the highlights. 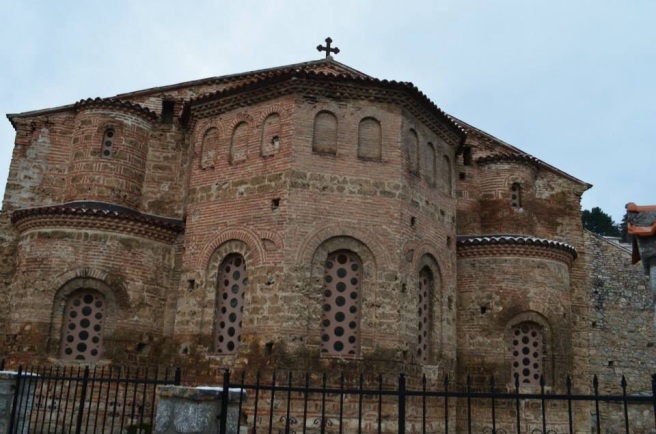 Having a wonderful start to our Macedonian experience, we started on our 2.5 hour drive to the capital city of Skopje – little did we know that this short drive would turn into a 30 hour test of survival.

Up until this point we had encountered little of the freezing temperatures and white covered scenery I had expected (with my Eastern-Europe = Russia thoughts). But then I got what I had envisioned – cold with snow. Lots of snow.

There is only 1 direct road that takes you from Ohrid to Skopje, the A2 (the only other way is a roundabout route through Bitola). The A2, while considered a major highway, is a scenic one-laned road that winds though the Dinaric mountain pass.

We should have figured we would have trouble when we passed several snow-stuck vehicles and got stuck 2 times ourselves (but were rescued by a strong push by locals). Problem was, it was press on or go back to Ohrid, where the roads were just as bad. 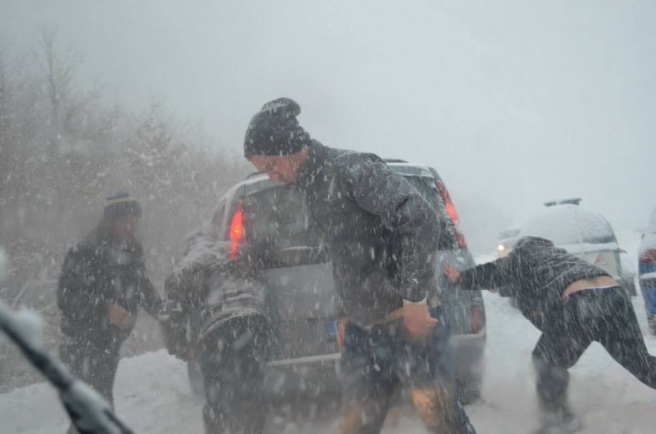 Just 15K shy of the town of Kichevo, we were finally defeated by the mountain. Our trusty Fiat Panda along with 20 or so other cars were forced to stop on a winding hill covered with 1 foot of snow. While some managed to move from this spot, our 4 hours of attempted pushing, rocking and hand shovelling did little to budge our car. And the snow simply fell.

6 hours on the road, and approaching 9pm, I decided it was time for some creative survival techniques. Attempting to talk to a bus full of similarly stuck people (cops, help, snowplow??) I managed to get the number of the local police, only to have the number not work. Later I found out so many people got stuck on that mountain that the line could not take the volume of calls.

Deciding the bus driver was a dead end for assistance, I moved to the Audi sitting next to it. Luckily these guys spoke perfect English and offered us a ride from their friends who were coming from Skopje to rescue them.

Heating the snow under their car enough to free themselves we decided to abandon our car in the hopes of finding a bed to sleep in and some food. Ironically, we got moving only to get stuck, yet again, 200 yards down the road where a Macedonian-one-lane traffic jam ensued. Blocking our rescue car from reaching us as well as lines of snow plows and police cars, we decided the only way to move was on foot. So we walked, caught a ride in the trunk of more Albanian-Macedonia’s and finally reached a place to sleep by 3am.

We were so overwhelmed by the assistance we got from these fellow travelers. Not only did they give us a lift, they brought us food, found a hotel for us and kept us company through 7 hours of snowed-in adventure – and I still don’t know their names. 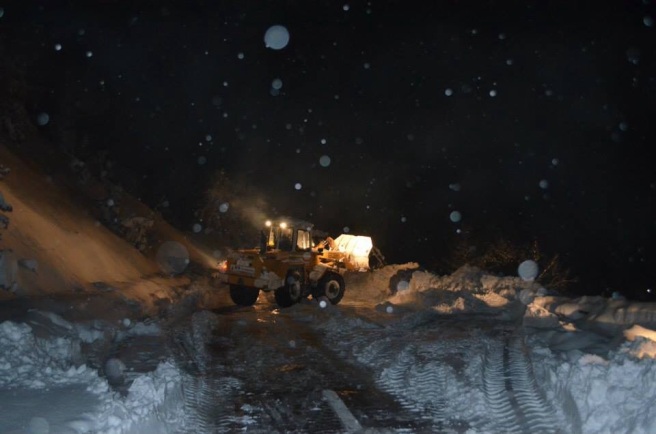 The following morning proved an even more interesting experience. While we were able to eat and sleep, we now had the task of figuring out how we were going to dig our rental car out of the mountain side still 15K from the town of Kichevo where we spent the night.

Apparently taxi’s were out of the question – asking our hotel for a taxi/ride, he simply laughed and replied “this is not America. There are no taxi’s”. Thanks buddy, believe it or not that is why I traveled to this country – because I am looking for some place that is not like America!

So 15K on foot it was. We managed to get a shovel from the hotel (thanks) and started our journey with our GPS that we had luckily grabbed and pin-pointed our cars location. About 2K into our winter wonderland hike, a local stopped and asked if we needed help. My husband, being the proud man he is, fell silent, so I quickly interjected with a “Yes please!”

Yet another kind gesture by a complete stranger. Drajon (sp?) ended up giving us a ride for 10K of the journey, but unfortunately was forced to stop short due to a police blockade. So again we were on foot; only to be rescued again by the snow plows that were doing an excellent job of clearing the mountain pass (it was clear they had worked through the night and had cleared the 200 car traffic jam as well as the roads). 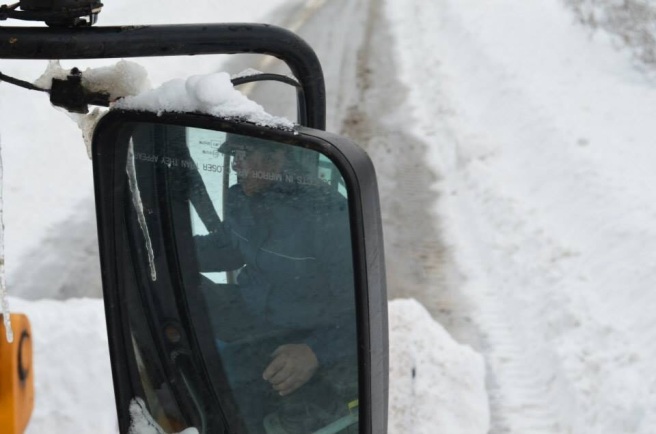 Hoping onto the small platform of a JCB/snowplow, we got to be part of the plowing experience as the vehicle slowly moved the 5 kilometres to our Fiat, barely visible in the towering snow. After some assistance by the large machines, we were able to shovel out our car and pushing it free within 30 min. After such an ordeal the night before it seemed ironic to have such an easy escape – all we needed was a snowplow and a shovel! 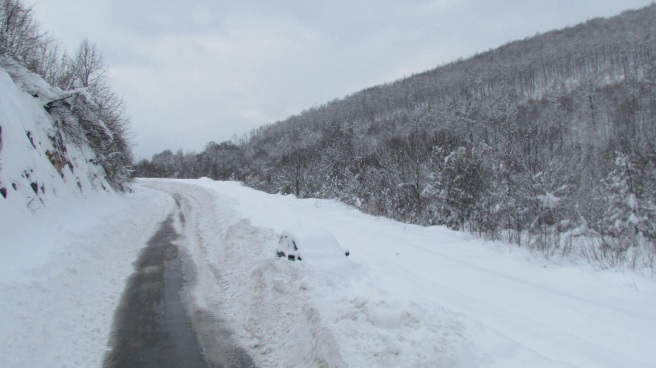 The best thing about this whole experience was to see human nature at work. We were helped over 5 times by random strangers. One even got in our car and drove it for us to help us get unstuck. Others brought us food. It was amazing to see how the community came together to help each other when public officials, who are usually charged with this duty, were unavailable or unable.

Many fear traveling to countries where the infrastructure is simply not there. This is a great example of why you should go there. We heard stories of working abroad, local food, pride in ones homeland and helping others. It shows us that with all our varying cultures, backgrounds and history that people are simply people, no matter where you go.

One thought on “People are People”