If there is anything about Belgium you should know, it is about beer (and politics, but that is a lot less fun).

Brewed by Monks, all funds collected from selling the beer go to charities or to fund the abbey; so you can take pride in the fact that while you are enjoying your 8% brew, you are also supporting the abbey fund as well as charities from around the world!

Visiting Trappist Breweries
The ability to visit these exclusive breweries varies by the monastary.

Chimay is the most well-known of the breweries and exports to all parts of the globe. However, despite its global name, visiting the abbey/gift shop (no Trappist breweries allow you to take tours of the brewing process) is underwhelming to say the least.

For 6 Euros you can take a mini-self guided tour on Chimay and its charities, however, you will be done with the ‘tour’ in about 20 min. Attached to the mini display is a pub and mini-gift shop which allows you to buy suvineor glasses. Overall though, not worth a special trip if you only have a few days in the country.

Westvleteren, on the other hand, I would highly recommend. Famous among beer lovers, it has garnered many awards, including being named “the best beer in the world” for its dark, complex 12 variety.

The title, however, I believe comes from its exclusivity rather than actual taste. Westvleteren beer is not sold on the economy and it is one of the hardest beers to get your hands on. The only way to taste or buy the beer is to visit the small cafe attached to the monastery or schedule an appointment buy calling their appointment line – which is not always open. Buying the beer you are looking for (they have a Blonde, 8 & a 12) is not guaranteed either, even if you have an appointment to purchase a case. The monks brew a certain amount of each batch according to what they need to finance their monastery and nothing more. This modest beer industry creates an ever rising demand for their complex, interesting brews.

If you want a more inside look at how trappist beers are made, I recommend a trip to St. Bernardus. Only a few clicks away from the famed Westvleteren, it is rumoured that St. Bernardus has virtually the same beer receipe as Westvleteren as they both come from the same origins.

From 1962 – 1992 St. Bernardus brewed beer on behalf of Westvleteren. Then in 1992, Westvleteren broke away keeping to more traditional means of production while St. Bernardus expanded to international exportation.

Other Belgian Trappist breweries not mentioned above: Orvel, Westmalle, Archel 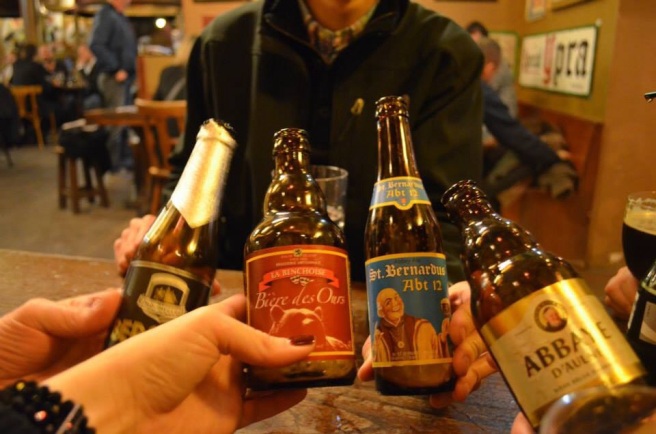 What’s the difference?
If you are a Bud Light type of person, you will be sad to know that your light lager goes bad after 9 months in the bottle.

Trappist beers (and many other Belgium brews), however, preserve similar to a champagne – and are bottled the same. Larger champagne bottles preserve the beer for much longer than your regular 12oz, lasting 5-6 years or longer. They also taste that much better and pack a heavy punch being fermented twice or sometimes even 3 times in the case of triples.

With so many beers to try and not enough days in the year to sample them all, Belgium is the Mecca for beer lovers.

One thought on “Trappist Breweries: An introduction”